Mar Tinaj
We bought this weather station because we upgraded our heating system to a ductless heating and the current indoor temperature feature was not available. We looked at many different weather stations online and finally chose this one due to the price and looks. We live on an island in the Pacific northwest and the weather changes so much throughout the day. So knowing the current indoor and outdoor temperature helps a lot. I don't really use much else features. I think I did see some weather stations had a tide feature and we live near the beaches so that would be helpful too. I'm not sure if this one has it. We decided to mount it so the wire has the least exposure. It is battery powered as well but it is supposed to be used as a backup power source. We mounted it at about 4ft high and have no trouble seeing it from across the room and at a 45° angle. 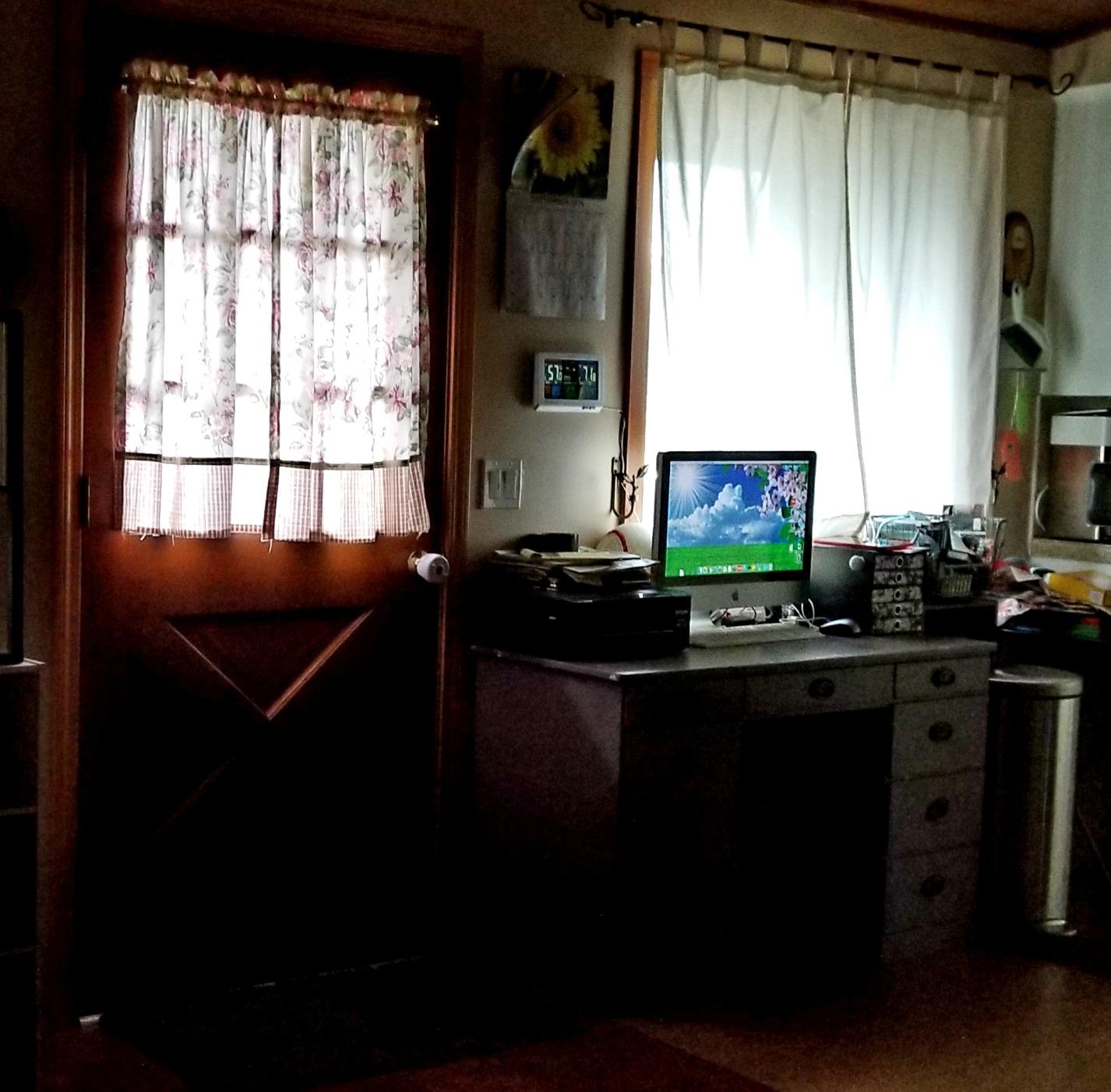 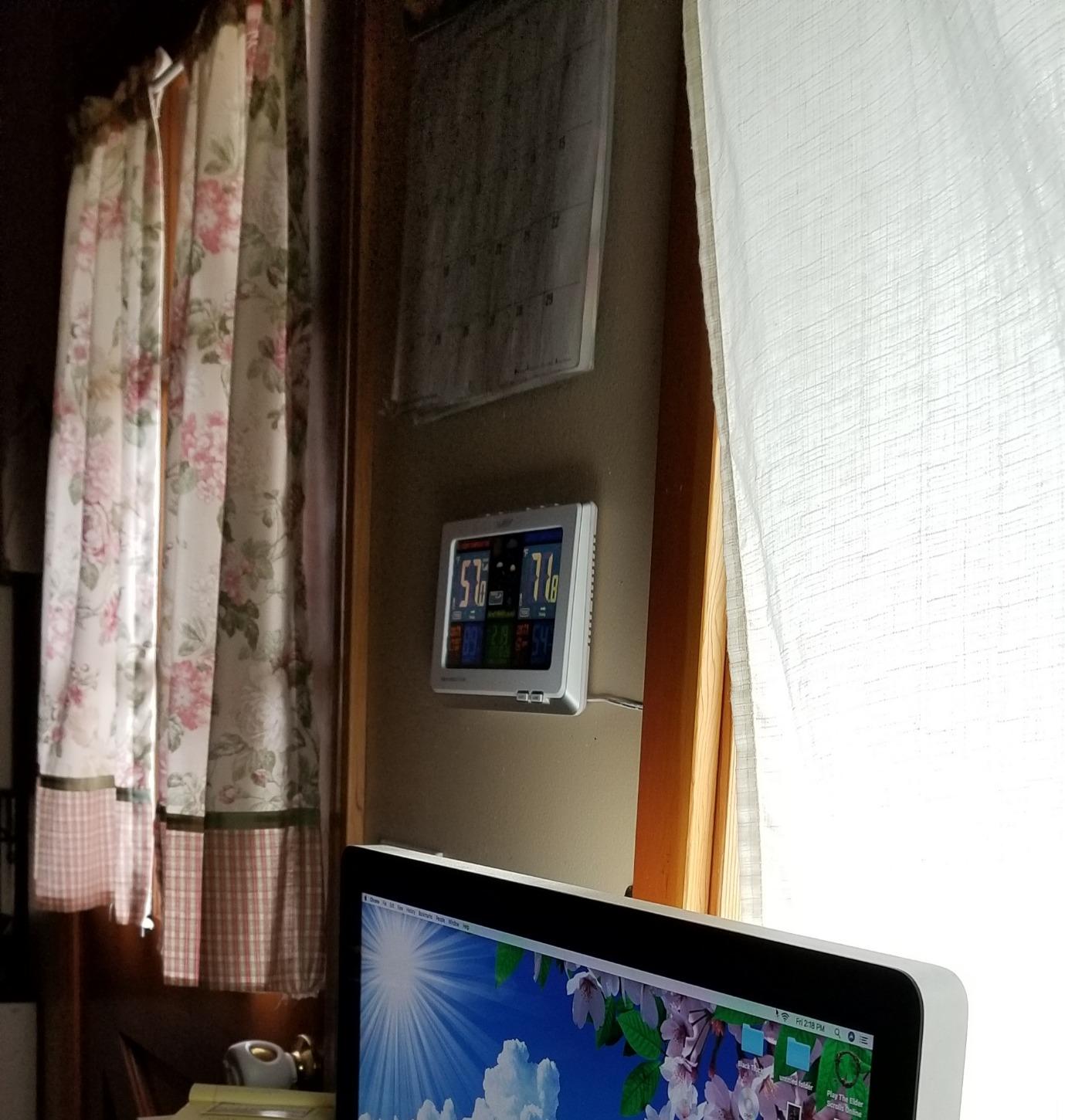 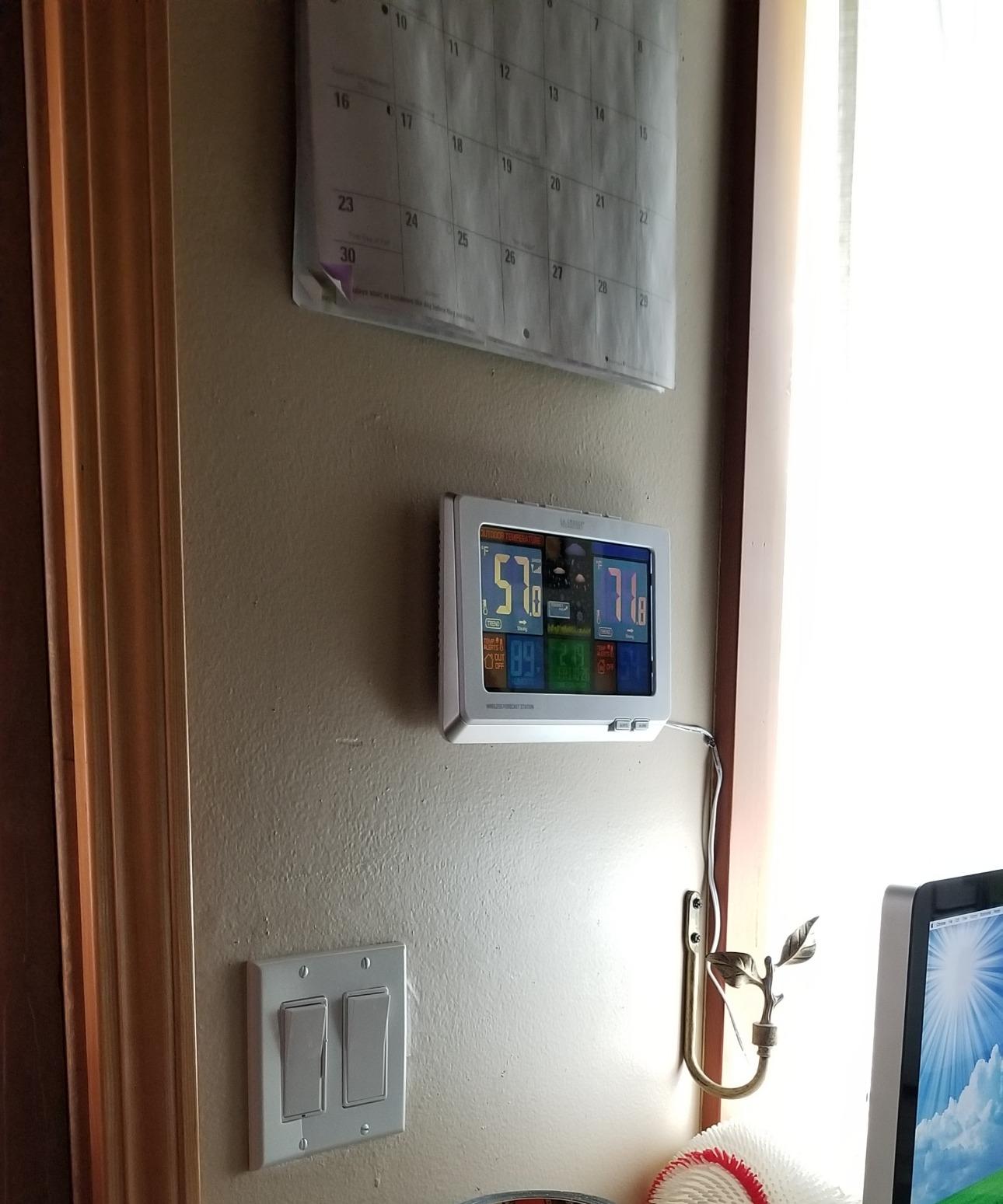 J. Holst
I bought this to replace an older weather station that I'd had for many years, and this one is fantastic. I plugged it into a wall outlet, but have batteries as the backup. The result is a fabulous looking weather station right above my thermostat on my wall. This is probably the best small weather station I've owned. 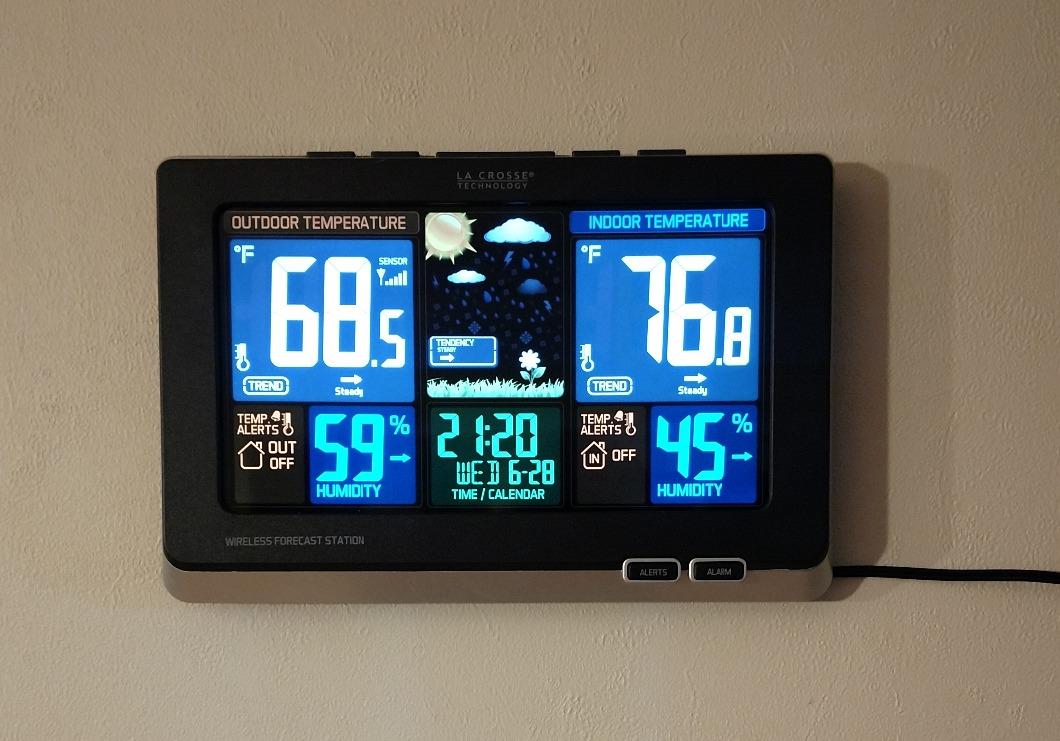 Carl B
Looks amazing and was able to get it mounted in no time at all. The station's prediction ability is a little hard to get but it gives you an idea of what you might expect during the day. It is battery powered but is nice to have an option to plug it in. I ran my wire up the wall and in a cable runner that disguised it well and made it look like it belonged where I put it. 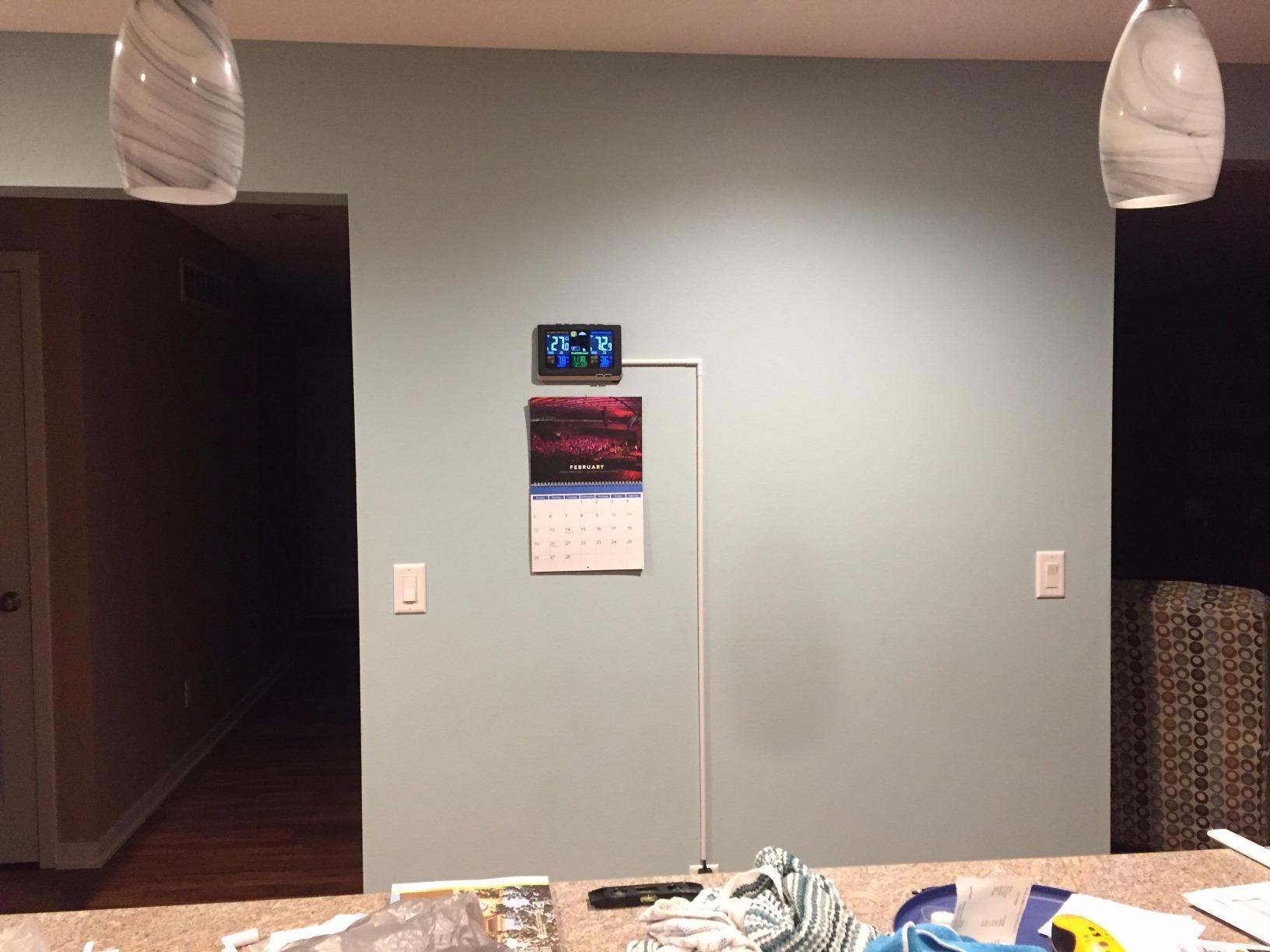 KLR650Tagg
Big enough, and bright enough, to read from anywhere in the room. Appreciate the full color screen, indoor, and outdoor are separately color coded!I keep subconsciously expecting the indoor side of the screen to be on the left for some reason.The high/low screen brightness is awesome! makes a great nightlight in the kitchen if you have it plugged in as i do.Screw-head mounts in the back, as well as a kickstand(which isn't confidence inspiring)Atomic clock can take some time to activate, so plug it in and put it in a west facing window for a bit to get the signal.While i don't expect ill need another, i would certainly highly recommend this unit.2 Month update:The unit is still performing flawlessly, and the atomic clock is still accurate with my other atomic clock, and that's getting signal from the far side of the fridge. The lithium batteries in the remote are still good to go.1 year later . . . . . . . .Still performs flawlessly, and the same lithium batteries are still in the outside unit, the only thing that has changed is the temperature! And it still messes me up that that outside is on the left, inside on the right.As always, i purchased this with my own hard earned money. 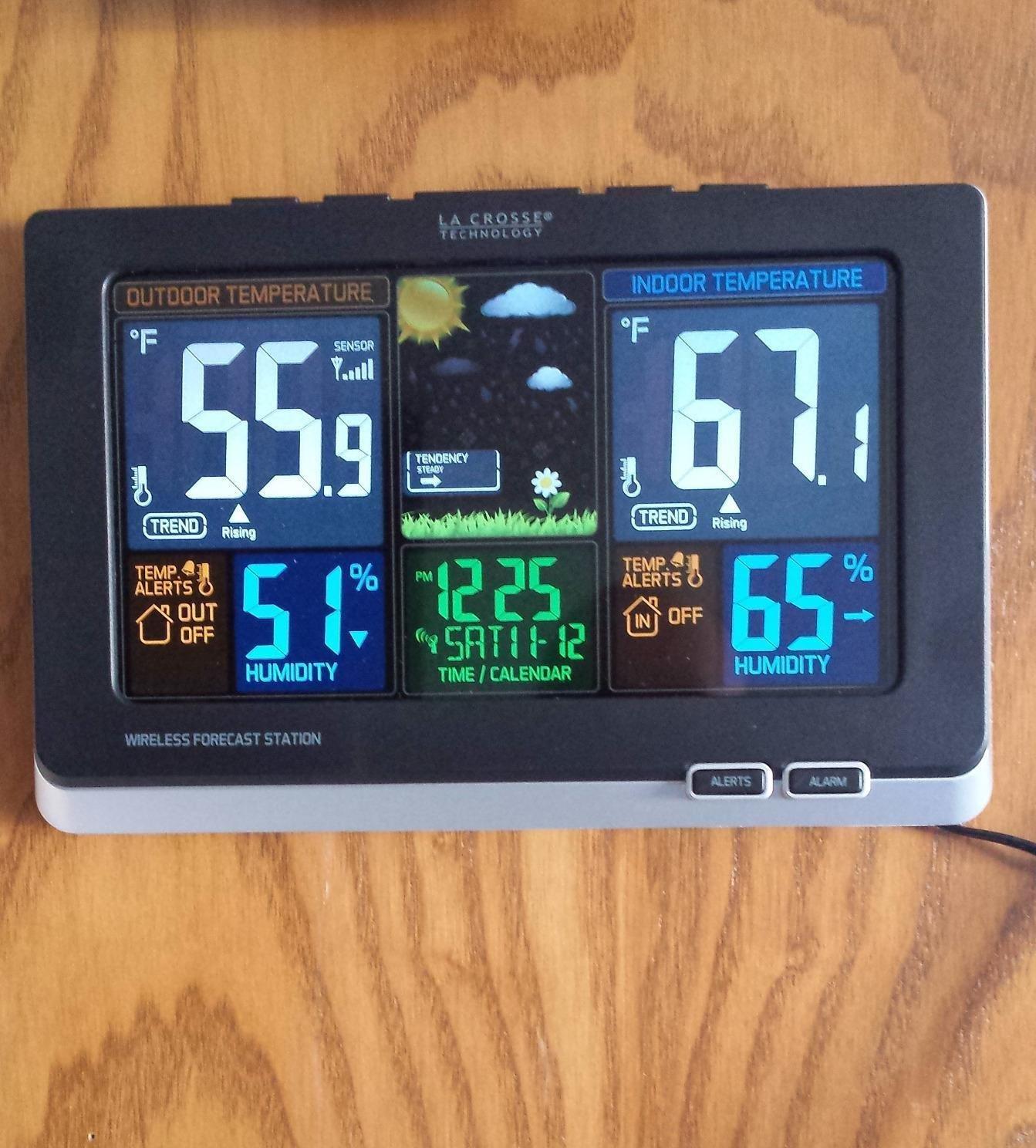 Douglass of DC
From the date of putting the batteries in the outdoor sensor. The batteries were added in the house fresh immediately on the unit's unpacking from its box. No rain had therefore fallen on the outdoor sensor, which had never even been outdoors. The outdoor humidity indicated on the sensor at unpacking was 19%, way off (probably 40% off) from what it actually was. 3 weeks later it was giving the same reading. I called technical assistance and got no help at all. From their point of view the problem was all our fault, and if one explanation of why that was so did not cut it, they had plenty of others. First they said I had the wrong or old batteries. I did not. Next they said that it takes about a week for the outdoor humidity reading to adjust and kick in. It had been at least 2, probably 3 weeks, when I called. Finally they said that placing the outdoor sensor other than under an eve meant that it quickly degraded. While the installation instructions said such placement was "preferable", they did not say the sensor would not work otherwise. They did not offer any possibility of replacement of this unit, which in the few weeks we owned it never worked as advertised. In fact, when I suggested I might as well buy another company's product and start again, they seemed fine with that.Bottom line: don't buy this!
Is this helpful?

G. Warnock
Saw some reviews about this and that not working correctly. Don't know if I lucked out or read the instructions correctly.I read the instructions, used alkaline batteries that I had in the refrigerator and set the unit down on the counter. Took the external transmitter outside and mounted it to the balcony handrail. It was flashing a red light every minute or so. That told me it was transmitting. I did the setup for time/date/day and just left it alone. It took 2-hours to stabilize external temperature (70 degrees to 36 degrees), a day to lock on to the atomic clock signal, and two days to get the forecast feature to lock in. The daily high-low feature works fine. The display is clear and easy to read from 19 feet away (center section) and 25 l-feet away (temperature / humidity). Colorful and vivid display. Looks nice and I like it.My 'other' weather station is a Davis Vantage Pro connected to a laptop which uploads to the Internet. It cost me $700. It has a 'few' more features than this does but I'm not using this LaCrosse unit in the same manner. I don't need to have barometric pressure, but the 'weather forecast' feature is the results of having a barometer at your disposal. There's a LOT to this LaCrosse unit and I'd not only recommend it to a friend, I'm considering buying another for the downstairs bedroom.
Is this helpful?

sgbtn
Extremely useful device but you need to use lithium batteries in the remote. I set it up originally with alkaline ( brand new major brand) and found the remote was losing synch with the use. This is the same problem described by a number of other review. Then I switched to lithium and immediately everything work ok and it hasn't lost synch once. With the remote working it is a great device. I did find it much cheaper at Sam's Club.
Is this helpful?